Ariel holds a master’s degree in band and choral conducting from the University of Michigan and an undergraduate degree in flute performance from the University of Denver.  Her teachers include Michael Haithcock, Jerry Blackstone, and Theo Morrison.
Ariel has served as Conductor of the Civic Philharmonic Orchestra (as part of the youth orchestra program under the Detroit Symphony), Conductor of the Celebration Youth Orchestra (now known as the Michigan Philharmonic Youth Orchestra), and Assistant Conductor of the Plymouth Symphony Orchestra (now the Michigan Philharmonic).  She has also served as a church choir director and private flute instructor.
In addition to conducting, Ariel is a full-time nurse in the Cardiac Intensive Care Unit at U-M Hospital, having completed an accelerated BSN program at the University of Michigan in 2012. 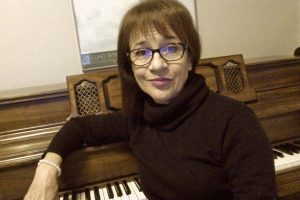 Maria became the YCC accompanist in the fall of 2008 when long-time accompanist Phyllis Bogarin retired. Maria is also the vocal music accompanist for the Creative and Performing Arts program of the Livonia Public Schools, Director of Music at Franklin Community Church, and accompanist for the Michigan Opera Theatre Children’s Chorus preparatory choir.

She holds degrees in vocal music performance and vocal music education. She has appeared with the Detroit Symphony as a guest soloist on a number of occasions, most notably at the Kennedy Center in Washington, D.C., and Carnegie Hall in New York City. Maria was cast in a Strauss opera that was produced in Detroit by the Detroit Symphony and recorded on London Records.

Stay Connected with Us

Rehearsals for our 2023 Spring concert will begin on Thursday, January 19th, in the sanctuary of  Emmanuel Lutheran Church, located at 201 North River Street in Ypsilanti.

Support the Ypsilanti Community Choir with your donation through PayPal.

The Ypsilanti Community Choir is a 501(c)(3) nonprofit, and your donation is tax deductible.